Scroll down to read on…

Cold air filled my lungs as I swung my one axe at the serac ice. I brought my feet up one by one and climbed as high as I dared, until the axe head was level with my waist.
The sunrise had lit the entire face in a golden hue, turning the ominous mountain into a marvelous spectacle of fiery beauty. It felt as if the whole universe and eternity ware captured into these minuscule moments of golden light.

As we were inching our way up Lautaro’s huge face, my calves were burning and the soft-ish ice gave doubtful purchase to the crampons’ finely sharpened front points…thank god I’d brought the technical ones! My other pair would’ve made me work hard for each foot placement!
I swung again, placing my axe as high as possible and sunk its entire pick into the ice. As I climbed up to level with the axe head, the burning sensation in my calves increased. The section I was on, involved about 15 meters of 70-degree soft-ish ice and normally, I would have climbed it all nice and quick, if I hadn’t worked my legs up on that buggering 50-degree slope of bottomless sugar for the last hour. God, my calves were really on fire. I felt as if I was about to shear both feet’s front points off the ice and slide down any moment now… 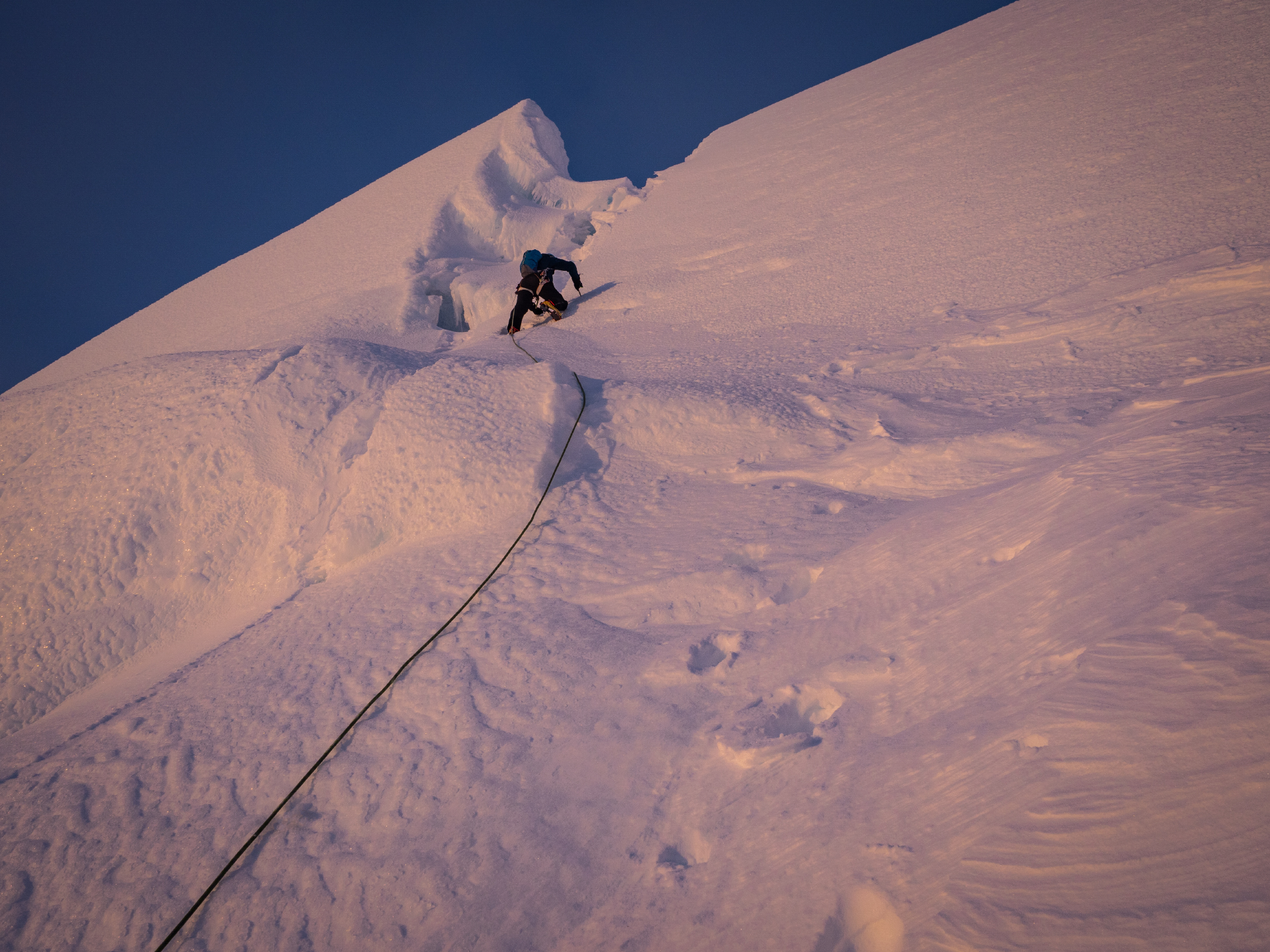 My heart rate increased, my breathing became shallow, my legs started shaking vigorously and that sense of primal fear was crawling steadily up my spine. The good ol’ feeling every climber knows – of being on the edge of falling off a mountain – returned with a vengeance!
I cursed at the decision to go light & fast. We had brought only a single picket and just two ice screws and one of them was the “belay” – the only protection between my girlfriend and I – hopefully preventing us from tumbling several hundred meters down the entire NE face of the mountain, should I fall while leading.
In practice, if you’ve ever lead an ice pitch, you’d know that a single screw in less than ideal ice could only temporarily protect…your mental health…
Although exposure wasn’t great – we were in the middle of a wide alpine ice face of fairly moderate difficulty – our situation was far from perfect. I had lost the way in the dark and we were wildly off route, snaking our thin line between menacing seracs and up virgin ground on one of the most remote mountains in Patagonia. We had intended on a climb of mostly easy difficulty and acceptable risk on Lautaro’s normal route from the east, but oh boy, we were now definitely in way over our heads!

I was at the point where stopping to place the only screw left would rather put us in more danger of falling, than do any good. I had to man up and lead the rest of the steep ice as fast as possible.
I steadied my breathing, put the fear of falling somewhere deep in the back of my mind, and focused on making every single movement absolutely perfect. I sunk into a very small world inside my head – the one where I ignore everything and just meditate over dead-solid axe placements. For a very tense minute, my life’s motto had again become “Don’t die today!” and just then, before I could realize it, I was doing a mantel over the top of the serac and onto a perfect, wide ledge. Relief and joy poured over me and I laughed out loud for a while. That same laughter, as when you deploy a parachute for the first time. Pure happiness and appreciation of being truly alive…There was also very strong irony in that laughter though. We came for an easy summit and were now 150 easy vertical meters away from *accidentally* putting up a first ascent in Patagonia…absolutely hilarious! I belayed Vicky and two minutes later she joined me, all out of breath and wide eyed at the remainder of the face above us.

More seracs barred our way up, but we had two easier options – a line far to our left, climbing onto the ridge, or a long and delicate traverse to the right, leading us to the col below Lautaro’s false summit.

I was giddy as a little girl at the idea of finishing “our line” and looking at the storm, raging at the col…I would’ve been happy to just keep on climbing towards the ridge and then look for a safe way down the mountain, but…it wasn’t what we had come to do.
After a quick discussion, we headed right, towards the col.
Vicky was in the lead now, stepping lightly on the ice. The slopes had eased to about 35-40 degrees, but we were tired and fall potential was increasing as we simul-traversed with no protection to save time.

Occasionally swapping leads among overhanging seracs with surprisingly correct geometric shapes, we reached the col some 30 minutes later. From a distance, it looked as if the winds were around 50-60km/h and visibility seemed feasible for continuing up to the summit, but when we climbed up to the ridge, we were literally hit by a freight train. Gusts were going up well above 100km/h and the air was full of ice shards, brought onto us from the west. It was as if we were under machine gun fire…We were constantly hit by flying shrapnel. Our arms and thighs were taking most of the direct hits but one piece actually smashed my camera’s lens cap to pieces! Talk about precision and luck! Absolutely unbelievable!

We climbed down to just below the ridge line to shelter from the incoming fire and sat next to each other, to discuss a course of action. We could definitely make it to the false summit. We had climbed together in storms worse than that…but what was the point? We’d still be too slow to make it to the top – we had been climbing for six hours by that point – and we’d have to come all the way down in the storm as well. Not to mention – the wind was likely to pick up even more with the gain in altitude and was blowing loads of snow over the east-facing slopes at such an alarmingly fast rate, that it simply screamed “MASSIVE WIND SLAB!” right into our heads. Whether we liked it or not, it was time to go down, save our skins, and maybe come back another day.

It took us three more hours to reach the plateau below and, believe me, every step was a hell of a fight. We could hardly maintain our balance. The wind increased in force as it blew down the slopes and threatened to send us flying into one of the many a widely open crevasses and the snow it constantly blew over us was bringing visibility down to nil. Despite being separated by only twelve meters of rope for the descent, for the first two hours, we only saw each other a couple of lucky times when the storm eased off a bit…

To say things were surreal at that point would be a massive understatement!

As we neared the lower slopes of the mountain and the ice cap’s plateau below, my eyes desperately searched for the tent where our base camp was supposed to be. It was nowhere to be seen. The small green dot I was intensely searching for had simply disappeared from this world. My mind went over the million possibilities of what could have happened, worrying mainly about it being blown away with all our kit and supplies. I had to make myself ready for breaking the news and to prepare mentally for a very long and very, very hard fight to walk over 50km back to safety with nothing more but the clothes on our backs and a few muesli bars in our pockets…and then I saw it, superimposed against the massive west face of Fitzroy, some 40km away.

At that moment, one thought overwhelmed me.
“My god…we are so damned small…”

Our expedition was conducted to raise awareness for

and was supported by: