THE EMPIRE HISSES BACK

Scroll down to read on…

I had decided to keep quiet after this expedition and let Brankov tell his poetic tales of, quoting, “lush-green landscapes”, because, as we all now know – that idiot sure can haul a big load. However…after his writings, overflowing with so much love, I kind of changed my mind

Despite his not-so-secret hopes for me to commit suicide on the crampons or maybe slip off some big boulder, his luck wasn’t working all that well. Brankov, however, isn’t a man who relies solely on accidents. He had built a well thought out and structured plan to eliminate me.

Under the pretense of helping me with preparations, he stuffed the entire house into my backpacks, gave me very detailed instructions about my flights and quickly buggered off to trek on the other side of the World. Men…

So…two weeks later, I started slogging my 23kg packs (plus a 15kg “tiny” little carry on) across airports, pushing the limits like a beetle with a dung. And while normal girls were doing there nails or having a massage to fill the time between flights, I tried to engineering a decent plan regarding, how the hell would I go to the bathroom with all that equipment. While still in flight, I received orders that we are to start the approach the next day after my arrival. In the hostel, Brankov took care of packing all the equipment.


For the ones of you who don’t know him, I have to say this – this idiot is capable of stuffing both a female elephant and her “little” babies into a single shopping bag. And he seems to get some sort of perverse satisfaction out of it!
The thought of the pain to come almost brought me to tears as I watched my 65-litre Abisko being reluctantly stuffed with sleeping bags, 80+ carb bars, 4kg of chocolate, 6 kg of nuts, expedition food (I just stopped counting the weight at that point) and god knows what else. Whatever couldn’t fit inside, was proudly strapped by various slings and buckles, and Brankov was sitting on top of it as smug as they come.

The next day, full of enthusiasm, we started hauling our loads on the approach. We moved with the speed and elegance of a snail in a coma. Surely, the forests were as lush as can be, and the views were breathtaking, but when you carry your 20-day-existence on your back, your respiration doesn’t work much anyway. Plus, your eyeballs are bloodshot and almost popping out of the sockets, so it becomes a challenge to even see that nasty thing in front of you – the one that all the skis, pulks, crampons and so on are sticking out of. That very same thing, naturally, neither uses blinkers nor has working tail lights.

Since he couldn’t dispose of me by way of crampons, he became more and more enthusiastic. Before us was one of the glacial rivers of the valley. After 10 minutes of nervously searching for a way to cross, the aforementioned bonehead saw yet another opportunity to rid himself of my presence and decicefully stated that we would wade across the water. It was clear there was no point in objecting his decision. I resigned from the attempts to take my socks off as well – it is practically impossible to stand on one foot with this monstrosity of a pack. It is also equally impossible to take the pack off, especially considering the idiot has already waded across and you’d have no way to lift it back on your shoulders. A few minutes later, already on the other side, I had acquired a tan, akin to the Frozen Queen and couldn’t help but wondering about these white and blue things below – were these my legs or just some ice, the river had brought from upstream?

Luckily, or not, there was a Tyrolean traverse over the next river. Brankov’s eyes were gleaming with hope but, once more, to no avail. However, he had the chance to pull both packs across the Tyrolean. And that’s where his engineering genius came to shine upon the world. The 53-kilo KAJKA was hanging hopelessly in the middle of the rope and refused all attempts at being moved further. Needless to say, the entire circus strapped onto its exterior was being wildly blown by the wind above the rapids. Photo and video documentation of these events is lacking. Upon hearing the expressive and graphic language from the other end of the rope, the camera had a seizure and refused to turn on. The lighter “Ladies’ bag” (only 48kg, mind you), was subject to far less profanity.

I pulled myself over the river and oh what a wonder of the gods! We only had another 700m of elevation gain until we were to reach the ice.
Flying over 13 000km to haul something you can’t even lift up on your back (Brankov, don’t laugh you sod!) is a rarely encountered form of idiotry. History remains silent as to which one is more stupid – “the gentleman” or the one buying into his thoroughly mental ideas.

On the next day we had a bit of a family occasion and my gift from Brankov was yet another storm and his best idea of a tent platform – tilted 10 degrees towards a crevasse. Such a romantic! 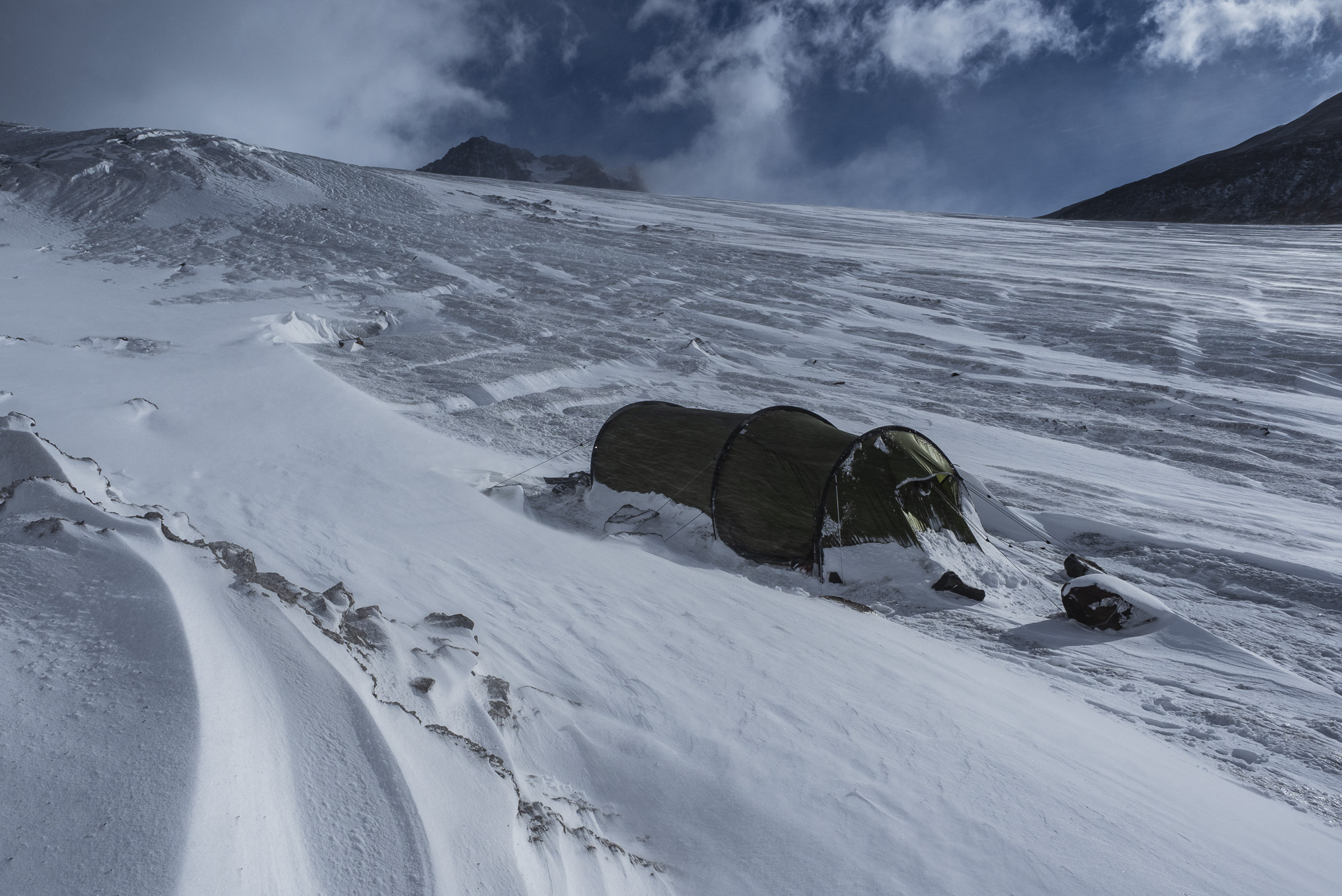 Our expedition was conducted to raise awareness for

and was supported by: